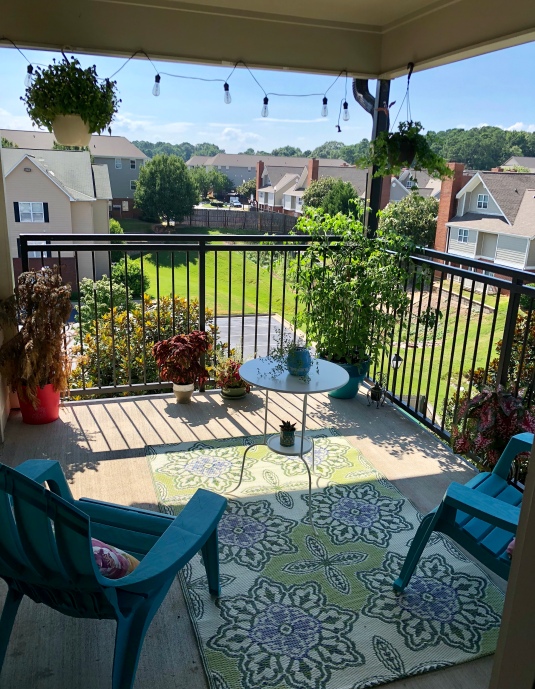 My balcony looks a little different from the last time I posted about it… mostly because my tomato plant is almost 6ft tall and 4ft wide! Additionally, I had to move a few plants around, and remove some.

There was a magnificently awful storm a few weeks ago that destroyed my impatiens and mandevillas, but with my tomato plant getting so large, it was starting to get a bit too crowded out here anyway. They were beautiful flowers, but I think the balcony looks just fine without them. I also moved my dracaena plant (the small tree) inside because it was getting too much sun out here.

On the white table I have a new thyme plant in this awesome singing flower pot my grandma gave me. It’s a bluetooth speaker, and you can also “play the piano” with its leaves. It’s so cute, and I love the way the thyme leaves spill out on the table. I wanted to get an herb that we weren’t already growing in the Auburn for Bees Pollinator Patch in the Auburn community garden and that also attracted bees, so I chose thyme. I’m not sure if it’s going to like its smallish pot, but I can repot it if I need to. I just really like the singing pot it’s in now, so fingers crossed! 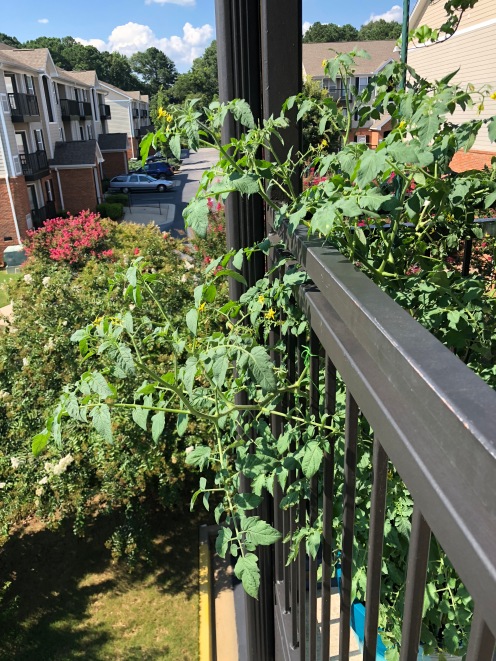 In other news, my tomato plant is HUGE! It’s crazy to think that I started with just a pack of seeds from the Target dollar section. Is this what motherhood feels like?

I counted how many tomatoes are on the plant, and so far I’ve got 74. That’s not counting the yellow flowers that haven’t been pollinated yet and can turn into more beautiful tomatoes. I’m worried that come late September and October, I’ll have over one hundred tomatoes! I hope my friends like tomatoes.

I’m hoping I can learn how to properly can them, and I’ll also make a ton of dishes like pasta sauce, pizza sauce, salsa, etc., that I can freeze and either keep or give to friends.

Finally, here are a few of the plants I keep inside. I recently moved my fittonias into a terrarium because it’s too hot outside for them, and not humid enough inside. They’re noticeably a bit crammed, but after fighting to keep them happy since the beginning of spring, it’ll be all right if they end up dying.